I am reminded of a great Saturday Night Live skit, which incidentally had Sean Penn doing a wonderful DeNiro impersonation, that featured Jon Lovitz as a lounge singer doing a version of "The Way We Were" as translated into French and then back into English. The transcription here is to the best of my recollection.

Can it be that it was all so simple then
Or has time rewritten every time?
And if we had the chance to smash into the wall again
Tell me, did we?
Will we?

Memories
May be beautiful and yet
What's too painful to remember
We send the Jews to forget. . . .

I am working on a book now that came about as follows: A Polish gentleman related elements of his life story in Italian to a ghostwriter. For some reason, the ghostwriter decided to write the book in third-person instead of first. The book was then translated into English, and the folks who will be trying to get the book published in English (first, probably, among at least a few other languages) decided the book would be better as a first-person account. That task has fallen to me. Not only am I copyediting the book, I am changing biography into autobiography, based on an Italian-to-English translation from a man whose first language is Polish. Here's a frustrating element. As for a while the man lived and did business in Great Britain, I suspect his English isn't too bad. The whole thing probably could have been done in first-person English to begin with, although his English is likely not as good as his Italian, or of course his Polish. Just a guess. 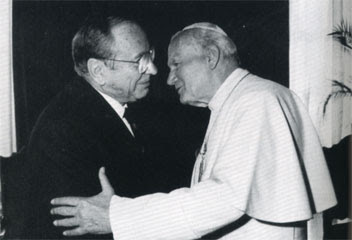 Very interesting book by the way, and it comes to me via a few relative giants in the publishing world -- one in religious publishing, one in the newspaper field. Kind of another case where I'm pinching myself that these people have found me and actually respect my opinion. I'm not at all trying to blow my own horn, but it's as I tell my sons (ages 19 and 16): one of these days I'm going to wake up and realize that I'm an adult -- something I guess they've grown up knowing. And given that today happens to be the anniversary of my birth, one that leaves me a year shy of the half-century mark, adulthood might actually be just around the corner.
Posted by czar at 10:17 PM

Aw, dang it, I missed your birthday! Happy, happy birthday! The world is a better place with you in it, keeping all the words in line.

BTW, I replied to both your emails yesterday and they kept getting kicked back to me as undeliverable. Who'd you piss off?

Moi: I'm not sure the world is a better place with me in it, and I do what I can to keep the words where they ought to be. Paraphrase from a favorite book:

"Words don't seem to bother you."
"Only in certain combinations anyway."

My ISP is doing some weird things with my emails. I'm not sure my two calls to them today helped, except that I ended up getting four separate deliveries of your emails, and none of the others I requested. I guess they know what's best for me. Hope there wasn't any potential work in the ones they flushed.