From the local rag:

“In Southwest Virginia, they’ve advised possibly toward the later part of the week we could be looking at rain or snow,” said Pokey Harris, emergency management director for Washington County, Va. “We’ll continue to monitor the system.”

Could you take seriously an emergency management director named "Pokey"?

[UPDATE 10/31: I've apparently offended the image gods, and the photo below -- pulled from images.google.com -- has been removed. Thanks for keeping up with the blogs, folks.]

Given the tornadoes here a few years back, she's had to deal with some serious issues, and I'm sure does a hell of a job . . . but still.

I must admit to reading "Pokey" and thinking something more along the lines of this: 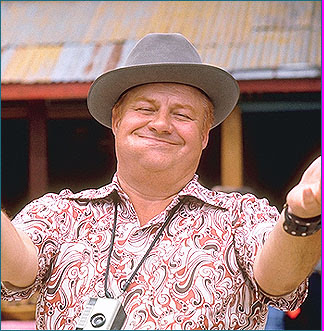 George McGovern, RIP, and Other Stuff

Of all the tomes I read in my younger days, I'd say that none politicized me like Hunter Thompson's Fear and Loathing on the Campaign Trail '72 -- not for forming my political opinions, but for raising my interest in the political process. And that was an interesting year, given that two years later, both the elected vice president and president who trounced McGovern would be gone from office in separate scandals. As I saw McGovern quoted in one of his obituaries, "We'd have had a better chance two years later." Indeed.

One of the lines that Thompson quotes -- I believe from Jeremiah -- is "The harvest is past, the summer is ended, and we are not saved."

Of course, I'm prone to misinterpretation and plucking quotes out of context, but I feel like my harvest just past with one of the most ridiculous work stretches I've ever encountered. The red leaves tell me summer has ended. Salvation? Don't get me started.

Just finished a mildly interesting book on the mutual dialogue ("trialogue") of Christianity, Islam, and Judaism. The Jews don't have much to say about the afterlife. What happens now is what counts.

One of the chapter's authors brings up the interesting point, though, that a religion that excludes people in its afterlife necessarily is saying something about how the religion will treat those excluded people in this life.

I've found myself giving rather specific advice to a couple of editorial newcomers lately -- as far as mapping out a freelance career and how to approach editorial changes. I enjoy doing that, and I hope they get something out of it. Some folks helped me along the way.

I'm enjoying a moment of relative calm. One of the hardest things about being a freelancer is making yourself work when you'd really rather not. It's been months and months since I've felt like I should be doing anything with my waking hours but working, so that I've not even had to face the choice. I have nothing due in the morning, and my world's not going to fold like a napkin if I don't work to exhaustion. It's a nice feeling.
Posted by czar at 5:30 PM 4 comments:

By my hasty calculations, close to one hundred times each and every day, maybe more, the monks at the Abbey of Gethsemani chant a version of the Doxology that ends "the God who is and was and is to come / at the end of the ages."

On the matter of the end-times, I can think of no better image of the apocalypse than needing to wear earplugs in a library at a Trappist monastery, where silence throughout is the presumptive ground zero.


I want silence that goes to eleven.

It's not like the monks were running around singing show tunes. More to the point, some of the other retreatants weren't wrapped up in the silence concept, even though that's the exact point, and one about which the abbey makes no secret. You almost literally can't turn around in some places, and certainly in the rooms, without a reminder to keep your piehole shut, suggested very nicely and thoughtfully, of course.

But, what are you gonna do? I'll be back another time, and it'll probably be more like the first time, where the silence was pretty well observed.

I also availed myself of some more Catholic devotional moments this time -- specifically, recitation of the Rosary and the Exposition of the Blessed Sacrament.

Now that's some wild stuff. I need Aunty to fill me in on the latter. The former seems to be bundled up in meditation and numerology. I can deal with that. I don't know what's going on in the latter. I spoke afterward with one of the devout, a Eucharistic minister, who tried to explain what I'd just sat through for an hour. It didn't help.

I mean, I'm in a room with people who sincerely believe that they are in the presence of Jesus (I found that out afterward, although I kinda knew it), and most of them sat like they were waiting for the bus. Maybe hanging out with the Messiah and Son of God just gets routine after a while. Perhaps all the activity is going on internally. Fine. What's the point of the device then? A monk comes and gets this thing out of a little medicine cabinet behind the altar, blesses it or kisses it, places it on the pulpit, and leaves for an hour. Comes back in, gets it, holds it up, puts it back in the cabinet, turns the key. I guess it's to help people focus? The Catholic Church is into totems?

I was hoping for a splinter of the cross or part of Jesus's foreskin or something. I can't imagine what the same rite looks like at the Catholic church around the corner from me.

Anyway, settling back in the saddle. Because of some family medical issues that consumed the run-up to Gethsemani, I was not able to go there without work, although the work done was at least appropriate to the site.

One day, hopefully in 2014, I'm going to schedule a seven-day stint there, and maybe the no-work thing can be realized at that time. To spend seven days there with nothing I have to read . . . and not needing earplugs . . . would be, like the Blessed Sacrament, ineffable.