Yes, that would be my son on the left, in the role of The Mute.

End of an Era

In about 52 minutes, I'll be signing in at the doctor's office to begin the quick procedure of replacing the lens of my left eye.

When the gauze comes off tomorrow, if past history is any indication of future results, I should have 20/20 vision in both eyes. Unassisted. For the first time in my life. My fixed right eye sees so much more than my left, glasses-corrected eye, it's silly.

Then this blog will stop this Twitter feed approach and maybe get back to talking about editing 'n' stuff.

Having said that, I just found out that the clan is considering a complete family Bonnaroo experience in June. Lineup was announced yesterday. I'm told it's killer.

Bonnaroo. No sweat on the glasses. Being able to see from far back. Yowza.

Haiku Monday: Getting Down to Business

All: Apologies for the apparently less than inspirational or motivational prompt. Thanks for participating. All entries were thoughtful and appreciated.


LibertarianCreed: Hands off. Ask first. No one’sbusiness but our own.

The combination of type and image helped, which is one reason for the mention and the reason for the centered type here. Posted under the image, "Libertarian" came across more like a caption or pronouncement on its own rather than as an adjective for "creed," thus leaving the last two lines standalone. Nifty.

PS: No matter what I do, I can't change the highlight behind this verse, even if I retype it. Moi, you are a wizard.

Yes, Becca, it wasn't your finest. And the dictionary shows "giggling" as two syllables, but does anyone here really pronounce it that way? I don't.

I like the lowercase start-off -- intentional or not -- which separates the action of the presumably youthful actors from the more mature observation of the last two lines. The anthropomorphism of "laughter run[ning]" is wonderful. "Monkey business" offered a creative use of the prompt word and managed to tug a subliminal Marxist heartstring (see the previous exchange with Karl) on this end.

Hmm. I wonder if in spite of Becca's image (not referenced in her posting and thus noncanonical [you can tell where my head's been]), this haiku might actually have been a subversive, collective-unconscious Marx Brothers homage?

The business of childhood is fun. The business of the Brothers Marx was laughter and running wild. Our winning haikuist managed to cover both. In literature, it's not the words that are being read, but the reader, right? Some school of thought holds such.

Becca: You've got an extra bit of business on your plate next week. Enjoy.

Thanks, Karl, for the handoff. I have to write fast because I have, of all things, an employee coming shortly.

Who I really need working for me is someone like this: 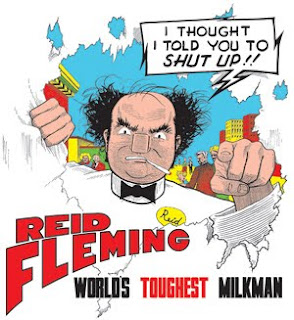 But, alas, some Baptist pastor has thrown in her lot with Land on Demand -- yes, "her" and "Baptist pastor." And it's not exactly Land on Demand, perhaps, entirely, in the long run. And while she's probably tough in her own way, she's no Reid Fleming.

Some changes goin' on.

After the last few days mulling over the pros and cons of two excellent HM prompts, an entirely different one just popped into my head based on current events -- those current events being that as of about 5 this morning, I'm now officially running a new enterprise, with an LLC and an EIN and everything. Website development began last month, logos being designed, copy being written, ad strategies, bank account. All new concepts for me, but in pretty familiar territory.

I'm starting a publishing house, sort of a different kind of home for authors who want to self-publish. Let's just say that now folks can buy it wholesale.

This week's topic, I don't think covered before, is business. Whatever that word inspires is fine. 5-7-5. Submit whatever you like in the comments section below; indicate two for judging. Audiovisual addenda be fine.

I just heard from a publisher in upstate NY that she's going home because of a snowstorm. Ah, another deadline diverted. Even so, I gotta head back down to the dungeon. Need to get that Protestant work ethic thing going.

And as Reid Fleming says, "Tell your friends."