Except for a three-and-a-half-year break when I was in college, I’ve been proofreading one way or the other since I was 14 years old. I’m 52 now. Seen a lot of stuff. The progression has been more or less orderly.

I also copyedit and index, but proofreading’s the one whut brung me.

My older son is an actor, just out of college, and as of the beginning of this summer had a year’s worth of paying acting work ahead of him. (Hallelujah.) I spoke with him a few days ago and asked, “Do you enjoy it now? The routine of the work and the rhythm of the day? It’s different doing a show 30 times instead of five, and rehearsing three or four other things at the same time. Are you enjoying it? Can you see yourself doing it for many years to come?”

His answer was an unequivocal yes, and I can understand it. My first job out of college was proofreading airline timetables and lottery tickets. Sometimes 12 hours a day, seven days a week. Once went 42 days without a day off.

Of course, that’s my life now, but it’s different having an employer say, “No weekend this weekend, and oh, by the way, 12-hour days.” And that’s about how it went down. Fait accompli.

It's also a little different when you're 21 years old without a responsibility in the world.

Anyway, I finally left the company, but my next job was another proofreading gig, and every job since has had an element of proofreading in there. I obviously enjoy the work and figured I’d seen about everything in the last four decades.

I’m going to deviate from this blog’s norm for this coming series of entries by naming company, author, and title. As Finnley Wren said, “I didn’t mean to bring this up again. You’ll forgive the reference? It’s an intrinsic part of the story.”

Some months back, Oxford University Press contacted me to help in producing an ebook of the Oxford World’s Classics edition of the 1922 text of James Joyce’s Ulysses.

I thought reading Ulysses would be enough of a challenge, much less proofreading it. I’d heard about it all my life as one of the great unread pieces of literature -- unread because of its difficulty.

But I have to read it. Difficulty is no more of an issue than for books of systematic theology I indexed in which I barely understood a word. The work must be done.

What are the rules for this game? Make three Word files created from scans of a printed volume match every single jot and tittle in an acknowledged world masterpiece, along with 50 pages of introductory matter and 250 pages of explanatory notes.

The 1922 Shakespeare and Co. edition of Ulysses has about 4,000 known errors (typographical, factual, intentional, unintentional), all of which need to remain in the book.

Thus, the task is to make an electronic file match a printed book exactly. The goal is a one-to-one reproduction of 980 pages, from a troublesome scan resulting from small type, italics, and 90-year-old Continental typesetting standards that probably did not match the author’s intent, as subsequent editions showed. The job is not to put out the best or the most authoritative version of Ulysses; the job is to create an electronic version of an existing book.

And it’s James Joyce’s Ulysses, for god’s sake. Even if it’s exactly right, it might not be exactly right. And it's being done for Oxford University Press. While I treat every job that comes across my desk the same, I'd be lying if I didn't say this one came with a bit of a higher expectation than most.

Long way from airline timetables and McDonald's scratch-off games. And I thought the novel would be the hard part of the project.

No way. Here’s a marked-up page of the explanatory notes, and it's not the worst, only the most quickly available. 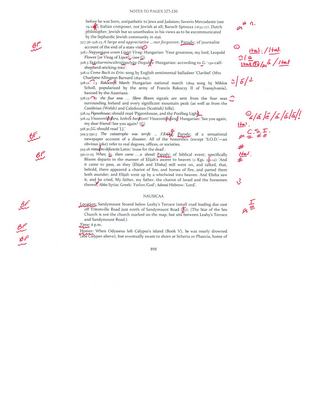 But I’m getting ahead of myself.
Posted by czar at 2:45 AM 3 comments:

After living with this beast for the better part of the last three weeks, I'd almost like to say what Jon Voight said to Ned Beatty at the end of Deliverance: "Maybe it's best we don't see each other for a while."

Fear Is a Man's Best Friend

A friend once uttered, "It is a wise man who every day learns something new to fear."

I sent him the following quote the other day, from a book I've been working on:

What did he fear?
The commital of homicide or suicide during sleep by an aberration of the light of reason, the incommensurable categorical intelligence situated in the cerebral convolutions.

An email from him earlier today:

Today I woke up fearing that the text of the most sacred work in Modernism is ensconced in Bod's capable, yet conspiratorial hands.

The novel's behind me, but miles to go, oddly.

Go ahead, listen. It won't kill ya.

Somewhere on this Sunday, it's my brother's fifty-seventh birthday. I suspect he will spend his day as I will spend mine -- in heavy editorial pursuit, attempting to keep other demons at bay. In my brother's case I have no idea what those demons are, but I guarantee you they are there.

Below is perhaps the only surviving photo of my brother and me in our youth -- maybe even the only such photo ever taken. (That's how we roll.) You will note the Mr. Natural poster on the wall. If I had to date this image, I'd say late August 1972.

Yes, folks, I once had hair. Lots and lots of it. 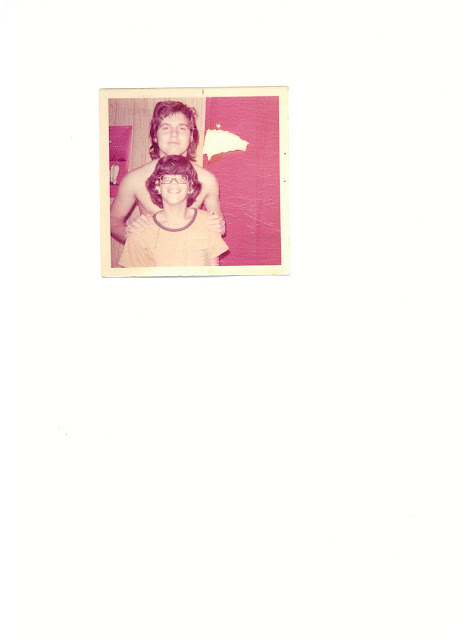 I'm working on the history of a venerable Catholic school in a bordering state, and I'm wondering if "Catholic girls, cute" is a viable entry. I would promise to index only those who appear to be over eighteen.

That plaid takes me back to the NYC public buses on Staten Island, and the girls who would hop on for a few stops. Back in 5th-7th grades or so. With the wonderful bus pass, you could get into the transit system all day long for a nickel. Early 1970s.


Maybe after a certain time, the uniforms were no longer so obvious, or the girls found other means of transportation.


Forty-five minutes on the bus (this is exactly what they looked like), then about a three-quarter-mile walk through city streets (caveat emptor: this is Park Slope, but it could pass for parts of Bay Ridge; I'm lazy)

and then duck ponds and past one mean-ass rooster. In Brooklyn. (Yes, this photo is of the school I attended from 1969 to 1977. Not a thing has changed, except that little structure off to the left wasn't there.)

You know, those were definitely not the days. But this was my commute for seven years, except for the short time when Ma Czar was teaching in the South Bronx and would give us a ride to school. Teaching 13-year-old third-graders, and needing an escort to go to her car.

And I don't know why the Catholic girls didn't return my stares.


UPDATE: In a weird bit of synchronicity, and there's been a lot lately, one of the boldfaced folks in my Brushes with Fame took the 2010 photo of my school's duck pond.
Posted by czar at 9:55 AM 6 comments: