This installment of the bunker’s verbal mix-tape.

Nothing in particular connects these tidbits, except that they attracted my attention enough to stop what I was doing and write “blog” in the margin.

As mentioned in the last installment’s comments, presence of these quotes indicates neither agreement nor disagreement on the part of the blogger.

“
A safe but sometimes chilly way of recalling the past is to force open a crammed drawer. If you are searching for anything in particular, you don’t find it, but something falls out at the back that is often more interesting.
—James M. Barrie
*
We primarily look for good character and integrity; we can train you on the rest.
—Paul Mullen
*
Two-thirds of the mass-energy density of the universe is made up of dark energy, according to our calculations. We don’t know what dark matter is made of, but we know that it makes up the other third of the density of the universe.
—Joseph Silk
*
For Burnet, the Earth of his time was the shattered ruin of a “perfect” pre-flood creation; the oceans were gaping holes and the mountains upturned fragments of the old Edenic crust. He was particularly offended by mountains: “If you look upon a heap of them together they are the greatest examples of confusion that we know in Nature; no tempest or earthquake puts things into more disorder.”
—R. J. Berry
*
When it was rebuilt, Gay Head [Lighthouse] also received a first-order Fresnel lens, the largest size made and containing eighteen hundred prisms. While many East Coast lighthouses stayed lit during World War II, Gay Head was dimmed. As the daughter of the keeper of the nearby Cuttyhunk Lighthouse put it, “They didn’t want to help the Germans that much.”
—Brenda Horrigan
*
Example. An applicant for life insurance and the insurer were both unaware that the proposed insured died before the policy was issued. The contracting parties thus made a mistake of fact because they were mistaken as to the existence of the proposed insured. As a result of a common mistake of fact, the life insurance contract is void.
—Harriett Jones
*
The 2002 Zimbabwe Census found that 48,223 households were headed by children less than 8 years of age.
—Rodreck Mupedziswa and Mildred Mushunje
*
[[index entry]]
Greene, Olive, 58–59
*
As Paula Harrell has pointed out, “missionaries may have hoped to develop interest in Christian ideas as they taught the elements of English, but for most of the Japanese youth who flocked to the mission schools, English functioned more like the Internet, as a gateway to new knowledge, in this case of technical and organizational systems that fuelled the power of modern Western societies. It was a case of dosho imu [同床異夢] (same bed, different dreams).”
—Hamish Ion
*
According to one visitor, “Most of the[se] agents at the Sandwich Islands divide the 24 hours into three parts, Drinking, Gambling and Sleeping.”
—Jennifer Fish Kashay
*
This man is exactly what he seems: uninteresting.
—Pete Wingard
*
Dr. Benjamin developed another habit that was often discussed. Before surgery Dr. Benjamin soaked his best A and E violin strings in oil gaultheria for twenty-four hours; he then soaked the slippery but highly malleable strings in alcohol or an antiseptic solution until just before he was ready to use the strings to stitch tight a wound or close a patient after an operation.

Land on Demand in the News

The Won Cause: Black and White Comradeship in the Grand Army of the Republic, a book by Barbara Gannon, is an Honorable Mention for the 2012 Gilder Lehrman Lincoln Prize.

Two books co-won this award for 2012, and Barb’s book nabbed the sole honorable mention. From what I hear (from the author and others), this award is given for books that achieve the pinnacle of Civil War scholarship—and a ton of scholarly Civil War books are printed each year. This is quite the honor, and the book is indeed an amazing piece of research. If I’m remembering right, I think I copyedited, proofed, and indexed this one. Barb’s sister, the czarina, and I all used to work together, and I thank Mary for the reference.

In the years after the Civil War, black and white Union soldiers who survived the horrific struggle joined the Grand Army of the Republic (GAR)—the Union army’s largest veterans’ organization. In this thoroughly researched and groundbreaking study, Barbara Gannon chronicles black and white veterans’ efforts to create and sustain the nation’s first interracial organization.

According to the conventional view, the freedoms and interests of African American veterans were not defended by white Union veterans after the war, despite the shared tradition of sacrifice among both black and white soldiers. In The Won Cause, however, Gannon challenges this scholarship, arguing that although black veterans still suffered under the contemporary racial mores, the GAR honored its black members in many instances and ascribed them a greater equality than previous studies have shown. Using evidence of integrated posts and veterans’ thoughts on their comradeship and the cause, Gannon reveals that white veterans embraced black veterans because their membership in the GAR demonstrated that their wartime suffering created a transcendent bond—comradeship—that overcame even the most pernicious social barrier—race-based separation. By upholding a more inclusive memory of a war fought for liberty as well as union, the GAR’s “Won Cause” challenged the Lost Cause version of Civil War memory.

Excellent New York Times book review of Queen Elizabeth in the Garden: A Story of Love, Rivalry, and Spectacular Gardens.

Great news for a small publisher. BlueBridge Books produces timeless volumes that are meticulously fashioned. I proofread this one. And it’s especially sweet as the Washington Post unnecessarily hammered another excellent BlueBridge book a few years ago.

Taking a fresh and original approach to the life and reign of Queen Elizabeth I, this book tells the incredible story of her great passion for gardens, and how the two most powerful men in England during her reign fought a decade-long duel for their queen’s affections by creating lavish gardens for her. It chronicles how, in their quest to woo the queen and outdo each other, Robert Dudley, Earl of Leicester, and William Cecil, Baron of Burghley, competed for Elizabeth’s favor by laying out innovative and extravagant pleasure grounds at their palaces for when she came to visit. As she played one off against the other, they created gorgeous palaces and landscapes that amazed the world. The book also describes how others in England and abroad followed Dudley’s and Cecil’s leads and how the queen’s love of plants made gardeners of courtiers, statesmen, and soldiers. This meticulously researched account reveals how Elizabeth’s enthusiasm for horticulture changed the world, encouraging gardeners and designers to create landscapes inspired by the spirit of the Elizabethan garden.

A fine week for the LoD client base. Keep up the good work, folks.

Valentine's Day 2012: We Are Mere Guests in This House 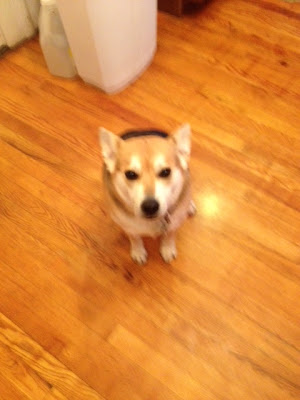 and the true alpha male,
the one that people remember long after they've forgotten us,
the beast who has been mostly an outdoor animal for going on sixteen years and is the color of asphalt,
the one whose vocabulary grows and grows,
the bilocator,
my dancing partner: 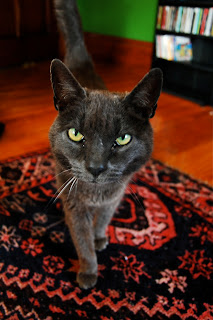