Vietnam Labyrinth from Texas Tech UP

Bob: Just want to let you know that I've set up a Facebook page for Vietnam Labyrinth--& one of 1st items I posted was a “thank you” to you & Richard Comfort, who also worked with me on the book. Both of your contributions were significant, & I wanted to acknowledge that, especially since each of you seemed to take special interest in the project, a personal involvement, if you will. I was very touched by your comment that Labyrinth was one of the 2011 books that you were proud to have worked on; meant a lot, coming from a pro like you.

Thanks again for helping make 25 years of effort a reality!

If you want an amazing history of the Vietnam War from about as inside a perspective as you can get from the Vietnamese side, this is the book.

And if you find any copyediting mistakes, keep ’em to yourself. 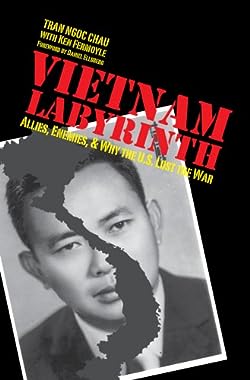 Sorry, folks. It's gotten out of control. Not like I've got a legion of followers anyway. I need to keep this place tidy.

Why Even Bother? Style Sheet Wars

Contra many earlier posts, I'm becoming a fan of style sheets -- good ones, that is. I've actually even created a few lately.

What I don't like, but which seems increasingly common, are copyeditors who, presumably from force of habit, start off a style sheet saying that they've followed Chicago 16 and Merriam-Webster's 11th Collegiate, but the words listed on the style sheet and the text itself show little desire to actually enforce what those two volumes suggest.

On the eye front, had the last exam yesterday, except for the six-month follow-up. Received a new prescription and went straight to the local mall optical store. For the first time in my life, I had glasses made in one hour.

Not enough of a treat?

Once the glasses were made and slapped on my face, the gent handed me a little card to read. At about an arm's distance, I read the bottom lines on the page.

Of course, anything less than arm's length, I'm still a little fuzzy -- not that I'm complaining. He did say that my vision might still improve a little more as everything begins to come together.

What's hard -- almost painful -- is bright sunshine. The ophthalmologist said that's not surprising once the cataracts are gone. It's like walking out of a dark closet. Just need time to adjust.

Anyway, back to work.

A Little Music While You Wait