A (Temporary?) Return to the Blog World

In the interests of equal time, as I memorialized my mother a few years back on what would have been her 80th birthday, here I honor my father, Ronald Marvin Land, who would have been 85 years old today. He passed away earlier this year. Some people say that when you lose both your parents, you're orphaned. I think that's nonsense, but losing them both does make you grow up in a different sort of way.

The image below is after our younger son's high school graduation, 2011. In this photo, my father was 78. I should look so good at 58; well, actually, I might look quite like that in a few months. Lately I've been mistakenly repeatedly for someone in his mid- to late 60s. Relative to the image below, I've lost the facial hair, the glasses, and about 55 pounds. Not that it helps much. 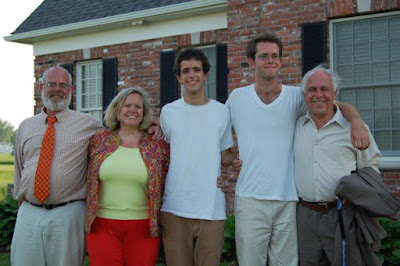