That's a quote from one of my favorite movies, The Petrified Forest (1934), starring Bette Davis, Leslie Howard, and Humphrey Bogart. The last time I watched it I thought it was occasionally sappy and overwritten, but it remains a fave. The first time I saw it, I think it must have been a day off from work back in the early '80s, or perhaps I was working night shift and it came on one morning or afternoon, and I was just entranced. Leslie Howard is a wandering romantic, and it's Bette Davis in a pre-uberbitch role -- playing a beautiful downhome girl working at her family's gas station in the middle of nowhere and dreaming of Paris. And then the plot thickens.

What brings this up? The topic I am going to address is the kind of thing that would get me laughed off of editorial freelancing websites as being a know-nothing ne'er-do-well, but (1) I am shameless about admitting my own ignorance and (2) I'll put up my work schedule and repeat client list against anyone who probably knows a lot more than I do. So I must be doing something right. Or maybe, as one of my clients once told me, I'm just a whore.

Anyway, "immigrate" vs. "emigrate." I can't sort the two out. Well, I can, but why bother? As far as I can tell, you are supposed to immigrate to and emigrate from. Fine.

"Juan Ton immigrated to the United States." Well, he had to leave somewhere to do so, didn't he? Here's what Merriam-Webster's 11th says:

emigrate : to leave one's place of residence or country to live elsewhere *emigrated from Canada to the United States*

immigrate : to enter and usually become established; especially : to come into a country of which one is not a native for permanent residence 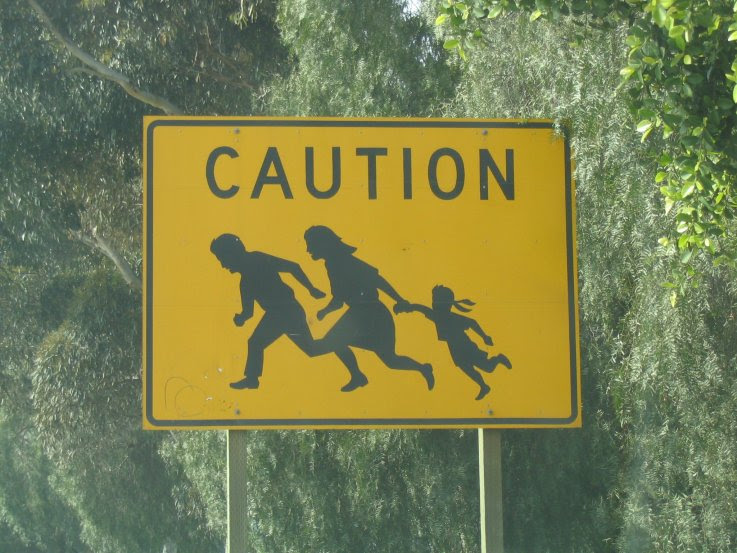 Between Bristol and Asheville, in northwestern North Carolina, there's an exit on NC 19/23 (which in some future century might become I-26) for Mars Hill/Marshall. How confusing must this juxtaposition be for people who aren't familiar with the English language -- not that the Dwight D. Eisenhower National System of Interstate and Defense Highways is really designed to be foreigner-friendly. I'm amused by the one random sign among thousands that gives miles and kilometers. What's up with that anyway?

Man, if the Republicans really wanted to beat Obama earlier this month, that's something they could have said that would have scared people more than Rezko/Ayers/Wright/Oprah. "Hey, everybody, if Obama is elected, he's gonna force us all to go metric."

Can you tell I'm avoiding work?
Posted by czar at 8:22 PM

Immigrate v Emigrate
Yes, you have to E in order to I.
In a technical sense, the E or I is determined by whether the individual is moving toward or away from the place in which the document is based, e.g. Canadians would write "He emigrated," Americans would write "He immigrated."
In a lit-critical sense, the E or I is determined by whether "He" is running away or running toward. Usage can also display the writer's bias RE: national policy, etc.
The Lost Generation are known as emigres or, interchangably, expatriates. The point is not that they had come to Paris, but that they had left the United States.

BN: Well, thanks. And thanks for checking in, and I hope you'll come back.

Cigars and getting better at this whole marriage thing. Huh. I wish you the best in both pursuits, which we share. I'm 21 years into the latter.